WHAT IS POWERVU KEYS

A+ A-
Print Email
WHAT IS POWERVU KEYS 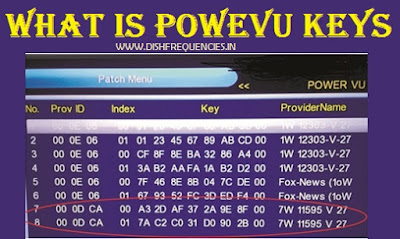 POWERVU KEYS is a type of a code that is used to encrypt the codes of the channel. This is used the scramble the channels. Some of the channels are provided free to air but most of them are paid (encrypted), can be watched with the paid subscription. These subscriptions are used by the cable operators to view the paid channels for their clients. But in remote areas the cable system isn’t reached yet. The lovers of Sports, Movies and other programs viewed on the paid channels can’t be watched by them. Now what can they do. Here is the solution. To view these channels encrypted with the PowerVu or Biss or other keys, they have to catch the key and put it into their satellite receivers to start enjoying these tv channels. But now the question is how to find biss keys, PowerVu Keys?, where the biss keys, PowerVu are stored?. Answers is that the keys are only the management team from where the satellite tv is being transmitted. They provides these keys on the internet for the lovers.

MORE: Updated PowerVu for All Satellite and channels